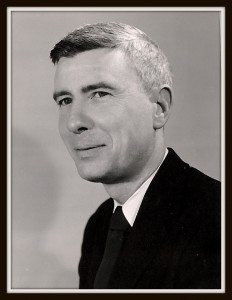 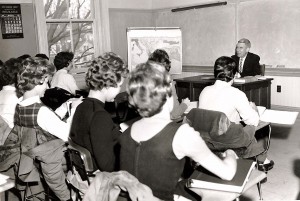 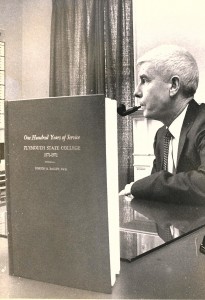 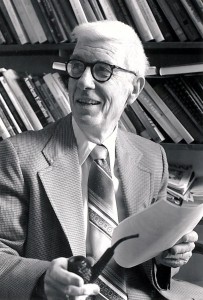 written by Jessica Fischer Class of 2017

Dr. Norton Bagley will always be remembered by the people he touched in his lifetime. From students to co-workers alike, Norton was praised for his warm personality, ability to inspire his students, and his dedication to learning. He was admirably nicknamed “Mr. Plymouth” because of his many contributions to the school. He also wrote a book titled One Hundred Years of Service, which, written for the 100 years celebration, chronicled the first century of Plymouth history.

Born in Derry, NH on January 19, 1920, Norton Bagley lived a long and well-lived life. After graduating from Pinkerton Academy class of 1937, Norton further pursued his education by earning his B. Ed from Plymouth State, going from there to acquire his M. Ed from Boston University and his PhD from the University of Connecticut. He had taught in Pittsfield, NH, but after tragedy struck in Pearl Harbor, he enlisted in the Army. For his service in the 54th Medical Battalion he was awarded the Bronze Star due to his time in North Africa, Sicily and Italy. Following his military service, Norton went on to be principal at McIndoes Academy in Vermont for three years, later becoming a demonstration teacher at Plymouth for an additional three years before leaving and returning to Plymouth for good in 1953.

His passion for learning and for teaching only grew as the years went on and he touched more and more hearts. Norton’s dedication and contribution to the Plymouth State community did not go unnoticed. He is credited for adding to the education programs, introducing various master’s degrees programs and groundwork for today’s graduate programs. Among his contributions, Bagley held various positions over the decades. He was a professor, director of public relations, dean of students, dean of instruction, director of admissions, director of placement and chairman of the Education Department.  Through his years at Plymouth State he was known for a warm personality, a great sense of humor, the environment he created in the classroom, and his relationships with his students. He was able to inspire students to achieve their dreams and was well respected by them.

In addition to touching people’s lives, Norton also contributed by writing the history of Plymouth and titled the piece One Hundred Years of Service in honor of the 100th year celebration of Plymouth State. Supplement to his book, Dr. Bagley wrote letters to the school chronicling times had here by him, as well as writing an unpublished book, Some Recollections of Plymouth Normal School, Plymouth Teacher’s College and Plymouth State College, detailing the numerous memories of his years at Plymouth. Norton wrote fondly and with great personal touch of his time spent here, giving us a great look at how Plymouth may have changed or stayed the same throughout the years.

Until the end of his twenty-nine years of service to the college, Dr. Norton Bagley made his mark. For many, his retirement was bittersweet. Innumerable amounts of colleagues and students did not want to see him go, but felt he deserved it. Being a nature enthusiast, he was able to enjoy his retirement by gardening, continuing to travel, and indexing books. Norton traveled to a slew of places in the U.S., Canada, and all over Europe. For his departure, many of his friends, co-workers and previous students wrote heartfelt letters to him. In these letters they described their wavering feelings to him as they said goodbye. Below are some excerpts from their letters:

•    A letter dated April 30, 1982 from the PSU President Kasper C. Marking:
“Please accept my very best for the coming good years of your life. Your retirement will leave a gap at Plymouth State which can’t be filled. Every one of us regrets your separation from us, but you deserve it and you will enjoy it. It is hard for me to believe that Plymouth State College can get along without you.”

•    Dated April 2, 1982 from a Mildred Horton:
“It is hard for me to believe that Plymouth State College can get along without you. On my first visit, I heard tributes to you from college students, and was led to believe that it would be hard for Plymouth to operate without you. I am sure that hundreds of students will feel that there is an unfilled vacancy when they return to the campus to find that you are not there. Fortunately, you are into the memory of all of them so you will not be forgotten.”

Dr. Norton Bagley was adored in his life and will be greatly missed in his passing. He had an affect on the lives of so many at Plymouth State and will never be forgotten. The mark he left has forever changed the Plymouth community for the better and his ideas and influence will continue to make its mark long after his quietus. The years may pass, but the educational and personal impact he made will always remain.