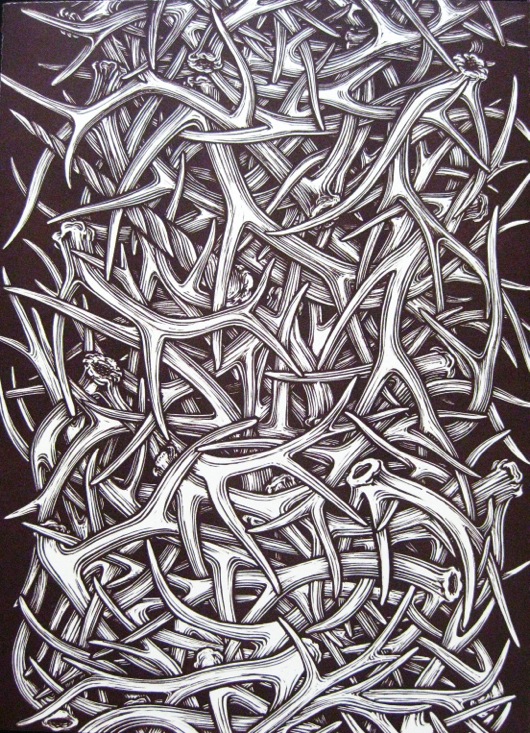 Exhibited from July 1 to September 11, 2015 in the Lamson Learning Commons, Main Exhibit Wall

In 1961 MIT meteorologist Edward Lorenz began contributing to a branch of mathematics know as chaos theory in an attempt to predict weather patterns.  Chaos theory is the study of systems in which small changes to initial conditions, yield large differences in outcomes.  Consider releasing a bowling ball down a lane.  A wide variety of outcomes are dependent on slight differences in the ball's initial position, speed, and spin (among other things). Lorenz coined the phrase "the butterfly effect" to describe his work on chaos theory.  He suggested that the flapping of a butterfly's wings might precipitate a hurricane on the far side of the world.  That is, a small change to the existing meteorological conditions might have a large effect on the state of the weather system.Responding to this theory, the theme for the portfolio was "The Butterfly Effect".  Twelve national and international artists were invited to participate in the portfolio.  Each of the twelve artists was asked to invite another printmaker, comprising the portfolio of twenty-four artists.  By encouraging participants to invite an additional person, all participants extend their collaborative community and their exposure to unfamiliar places, people, and ways in which artists create prints and exchange information.  Artists were asked to respond to the theme the butterfly effect and consider how they interpret chaos theory, pattern, order, mathematics, predictability, or butterfly effect.  The organizer of the portfolio was Fawn Atencio, a Denver, CO based artist and educator.  PSU Art Professor Kimberly Anderson Ritchie participated in the portfolio

We are pleased to included Butterfly Effect as part of the Lamson Learning Commons Print Series.  This portfolio has also been exhibited in the following locations: