Information for master's students preparing for, writing, or submitting their theses.

Manuscript Document Format is a single thesis document made up of one to several scholarly manuscripts or journal articles addressing a common theme. All manuscripts/articles must be related or address a single, common theme. You must be the primary author of each manuscript. Co-authors other than your major professor must be mentioned in a Contribution of Authors page (see Figure 7) in the pretext section of the document. The following parts comprise the Manuscript Document Format:

Note: Within the larger Manuscript Format thesis document, Chapter Heading Pages (see Figure 1 below) precede individual manuscripts that have already been published. Manuscripts must uniformly conform to these thesis guidelines. 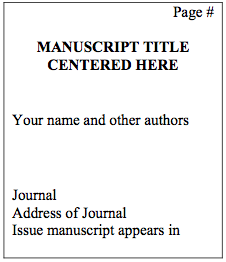 Please verify all formatting with your thesis committee.  These examples should illustrate proper formatting.

Your document begins with its title repeated and centered on page one. Titles longer than one line should be single-spaced. The document’s title does not count as a heading level.

Use regular, unadorned print, 10- to 12-point size for text (headings may be 14-point only if all headings are 14-point). Use the same font style and font size throughout.

Chapter names are Level 1 headings. Subheadings of a chapter are Level 2 headings. Subheadings of chapter subheadings are Level 3 headings, and so forth. Each level must look different from the other levels. Headings of the same level must look the same throughout the document. All headings, regardless of level, must be the same font size. Either number all headings or number none (See figures 9 and 10). Single space headings that are more than one line, and use adequate and consistent spacing between headings and the text. A minimum of two subheadings may be used within a given level. Each level 1 heading begins a new page.

A numbered, counted page should be inserted in front of your document’s appendix/appendices. The word APPENDIX (or APPENDICES) should be centered about 1/3 down this page. This heading page and its page number should appear in the Table of Contents.

Use Blocked Quotes for quoted material longer than three lines. Use the same font size as within the text. Single-space the quotation, and indent it evenly on both sides. There is no need to justify quotations.

Use the same font size as within the text. Choose a reference style with the guidance of your major professor and your committee and be consistent. Single-space each citation, and use adequate and consistent spacing between citations.

Footnotes collected at the end of a chapter are called endnotes. Use the same font size as within the text. Single-space each endnote, and use adequate and consistent spacing between endnotes.

No orphan lines may appear at the top or bottom of a page. No headers or footers may be used. Footnotes are acceptable.

Figures may be located in one of two places in your document. You must choose one system, and use it consistently throughout your work.

Figures include charts, diagrams, drawings, examples, graphs, illustrations, maps, photographs, etc. In the majority of cases, if it’s not a table, it is a figure. A figure’s labels denote the type of figure and its number, and a figure’s caption is its title and description.

Every figure must have a label and caption unless there is only one figure of its type in the document. Use consecutive label numbers by order of appearance within the text. Each figure must have a unique number. Illustrations that take up more than one page should have the label followed by “(Continued)” on the second page.

A table is broadly defined as a compact, systematic list of data (facts, figures, values, etc.), generally arranged in columns and/or rows. All tables must be listed in the pretext pages’ List of Tables.

Are located above the table, on the same page as the table. Table captions should contain the illustration number, i.e., Table 1 and its title. You may number tables consecutively throughout the text or within the chapter, i.e., Table 1.1 for the first table in Chapter 1 and Table 2.1 for the first title in Chapter 2. As always, pick one method and use it consistently throughout your document.

Because of their shape, some figures may need to be placed crosswise on a page. If so, the top of the figure should be at the left margin as viewed normally (i.e. portrait orientation), and the caption should be parallel to the right margin. The page number keeps the same location and orientation as all other page numbers in the text. Margin requirements apply.

Figures should be photocopied directly onto the paper whenever possible. If it is necessary to use original figures, they must be mounted onto the paper with a spray adhesive. Rubber cement should not be used, because it yellows and deteriorates over time. To test if your figure is correctly mounted, put your fingernail under an edge and try to lift it away from the paper—if it lifts even slightly at any edge, you must fasten it again.

Color used to differentiate lines, bars, or segments will reproduce as shades of gray on microfilm and in photocopies. Choose high-contrast colors that will remain distinct in the black-and-white process, or use symbols with or without the color. Photocopy the image directly onto the paper or use a laser printer. Do not print with water-based ink.

There are 3 ways of managing the inclusion of oversized figures:

Because bound copies will be placed on shelves in Lamson Library, the following paper and printing specifications will help us preserve your thesis or dissertation for a longer shelf life.